Three out of these figures are similar in a certain way. Find the figure which is different from the rest.

D is the option cause in other figures atleast 2 are open in same direction.

I think the answer is (D)

I THINK THE ANSWER IS 'D'

The given graph shows the number of cakes baked by 6 bakeries in November. Study the graph and answer the following questions. 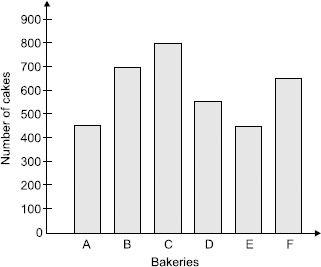 How many more cakes did Bakery B sell than Bakery F?

How many angles are less than 90° in the given figures?

There are 4 angles less than 90 degree in the given figures.

of course it is c from master admin

there are 4 accute angles

there are 3 angles less the right angle in the figure

yes you are right

The question is unclear and if you count the angles there are 4 angles less than 90 degrees which is wrong i think .

Questions must be clear whether Interior or exterior angle to be consider?????

It is c right

Question is not clear, it does not specify that only the angles inside the figure are to be measured

Option a is actually the answer.

Option a is the correct answee

OPTION A IS NO DOUBTFULLY THE ANSWER

According to their own solution b is a supposed to be correct but the answer given is d???

ans is b.there is a technical problem

The correct answer is b not d

The ans is supposed to be b but the website says it is d. I can’t understand how.

Correct answer is b

B is correct actually

yeah guys !!!! the answer is B.....not D. it is so obvious, the second statement is true....the solution given by the website makes no sense.!

Yeah it is definitely true.

The answer should be b. This sum is there in the IMO Workbook and there the answer is b

The second statement is true so, answer should be option B

the second statement is true so, the answer is B

The given figure is formed by two identical circles in a rectangle. E and F are the centres of the circles. Find the area of the shaded part (Take p = 22/7).

How many possible combinations of 1 notebook and 1 pen can be formed from 5 notebooks and 3 pens?

The answer is d.

Answer is C as the question says the combinations of 1 notebook and 1 pen from 5 notebooks and 3 pens, which is 5*3=15.

Sorry, the answer is D.

Sorry, the answer is D.