What plastic is PVC?

PVC is actually a very hard type of plastic which is used to make pipes,water bottles,etc.

PVC is a thermoplastic

Four identical syringes were filled with different substances as shown. In which syringe will the plunger not move at all when pushed in ?

Can anybody explain me please ?

when salt is added to water its density increases greatly.therefore it is very tough to push the plunger.

Which of the following statements is INCORRECT?

ABrain controls all the body parts through nerves.
BWhen we breathe in air, the lungs increase in size.
CSimilar cells join together to form organs.
DReproductive system of men is different from women.

Choose the correct statement with respect to X, Y and Z.

The correct answer is D.

name the process by the plants make their own food?

Photosynthesis is the process by which plants and some protistans use the energy of the Sun to produce sugar, which cellular respiration converts into ATP, the "fuel" used by all living things. The conversion of unusable sunlight is associated with a green pigment called chlorophyll. Julius Von Sachs(1832-1897) , a German botanist and physiologist initiated experimental plant physiology to study in the effects of light and heat on plants and how plants get their food. In 1854, Sachs showed that plants produce sugar with the help of a green pigment called chlorophyll. Sachs also showed that chlorophyll is not spread throughout the plant, instead it is present only on the leaves. Which is why leaves are green in color.

The festival of lights is Diwali and it falls in the month of October or November. Correct Answer is C. Between Gandhi Jayanti ie. 2nd Oct and Christmas i.e. 25th December

can somebody explain ,,how warmth comes from stored woollens

Ashish was performing an experiment by setting up an arrangement as shown below. He kept three different types of soil in the three funnels. Then, he added 70 mL of water to each of the funnels. The setup was kept undisturbed for an hour. 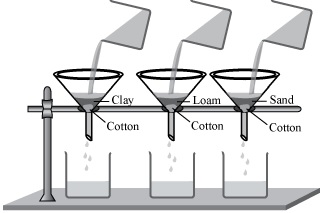 Which of the following relations holds correct regarding the amount of water present in the three beakers after an hour?

how is it ?explain.

sand does not absorb water and allows water to pass through it .similarly water in 2nd container absorbs water more than 3rd container . same happens in1st and 3rdcontainers

From where we get study material in the market.

Which of the statements is correct?