Which of the following shows the distribution of charges on a neutral metal sphere when a negatively charged balloon is brought near it? (Assume metal sphere is at insulating stand.)

Read the given statements.
a.

- It's nest is made up of 2.
Select the option that correctly fills the above blanks.

it is sure sure B

Which of the following NOT reduces force that opposes motion?

D non of these

Why answer is not D.

While demonstrating the reactivity order of different metals, a science teacher arranged the following apparatus : 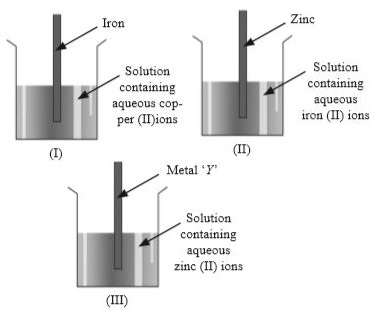 Select the correct statement regarding this activity.

A A chemical change will take place in all the three beakers if metal Y is magnesium.
B There will be no change in colour of solution if metal Y is aluminium.
C The reactivity order of given metals is Y > Zinc > Iron > Copper if reaction occurs in beaker (III).
D All of these

Please explain me the question

Select the option in which correct odd one is encircled.

(i) Sedimentation - Sedimentation is a physical water purification process using gravity to remove suspended solid impurities from water. The water is allowed to stand till the suspended solid impurities, which are heavier than water, are pulled down by gravity and settle at the bottom of the container.(ii) Chlorination - Chlorination is the process of adding chlorine, or chlorine compounds such as sodium hypochlorite, to drinking water to disinfect it and kill germs. The addition of chlorine will also oxidize any iron, manganese and/or hydrogen sulphide that are present, so that they too can be removed in the filtration process later on.(iii) Filtration - Filtration is a process of water purification, which is used to separate solid impurities from water by using a filter medium that allows the water to pass through but not the solid impurities. These solid impurities are not heavy, so they do not settle at the bottom, but remain suspended. So, a filter is used to trap them.So, to purify water, it must go through sedimentation (i) first, so that heavier and larger size impurities like sand and dirt, are allowed to settle at the bottom of the container and are removed first. Next, water must go through chlorination (ii), so that bacteria and germs present in water are killed. Any iron, manganese and/or hydrogen sulphide, if present, also get oxidized by chlorine. These can be removed later by the filtration (iii) process, along with other suspended impurities.Hence, the right answer is Option D.

the order should be 1-3-2 . there is no option like that. what are these SOF people

correct order is 1-3-2 but there is no option

The correct order is 1-3-2 and there is no option like that .So,I think that it might be a printing error.

I have paid for nso . How to download it. Please suggest.

Select the character which is not common to the given animal group.

A They all breathe through lungs.
B They have hair on their body.
C Internal fertilization takes place in them.
D They all give birth to young ones.

I think answer should be A , Platypus lay eggs and do not give birth to young ones

All of them don't have hair

it is written not common and then also it's saying D

Itâs both b and d

bat has microscopic hair, bear has fur, dolphin has hair when it is a baby, platypus has hair. platypus also lays eggs. so d is the answer

In platypus they lay eggs

it should be both B and D

Both B and D are correct

Why will the answer be D? The animals are dolphin, whale, bat, bear and platypus, and they are all mammals and give birth to young ones. This is a common feature, but the question says to mention the uncommon feature. The answer should be C for sure. The solution given is wrong.