Which of the following observations confirms that an object is a magnet?

why is n't answer B Right!

both option b and c are the correct options as a magnet repels the needle of the compass if the pole of the magnet is a like pole. If the magnet turns around to stick to the another magnet then it means that it turns so that unlike poles face each other and the mgnets stick to each other

B is the correct answer

Ans B should be the correct answer. Magnet may rotate or may not it will depend upon which pole is close to the other magnet

Option B is the answer, because if magnet is brought close to the compass, the needle points towards the magnet.

The answer is C as it is the only option that somehow results in repulsion while others don't.

Ans.c as even a magnetic material will attract the compass needle. Only a magnet will repel another magnet and rotate before being attracted to the other magnet.

Only a magnet can attract a compass needle. A magnetic material cannot attract it. Then why not B?

The option should be the correct one as the magnet may not rotate due to opposite poles of the magnets. So , it is not necessary for it to rotate in all conditions. So, I think option B is the appropriate answer.

Given below are the differences between self pollination and cross pollination. Which one of them is incorrect ?


answer B is also write

Match different organisms in column-I with their related characteristics in column-II and select the correct option from the codes given below. 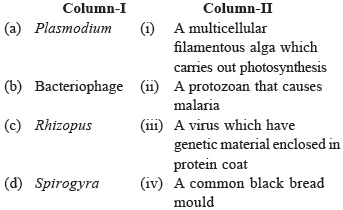 shouldn't the answer be option A

Refer the given figure showing changes in flag's shadow during the day. 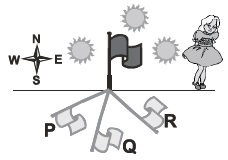 Shadows P, Q and R represent different times of the day. At what time, would Preeti most likely to have ________?
(i) Breakfast
(ii) Evening snacks


Seems to be wrong answer,breakfast will be in the morning ,,that's "R" not "p"

shadow Q in picture is not right.it is near to noon.so shadow should be smaller.

Which of these feet would help hens in scratching the ground to dig out insects and worms.

OPTION C IS THE FOOT OF A HEN.

Four statements regarding natural gas are given below.
I. It has a very low calorific value.
II. On strong heating, it releases hydrogen gas.
III. Natural gas is made up of methane only.
IV. Natural gas is a clean fuel.
Which of the following pairs of statements is not correct?
AI and II
BI and III
CII and IV
DI and IV

correct answer (A). natural gas is a clean fuel.

it should be A

I guess b since H2 can be obtained

In the given pictures, two containers of different colours are filled with hot water.

Vessel 'P' is painted black whereas vessel 'Q' is painted white. Which vessel maintains the hotness of water for longer duration?

black vessel will radiate more heat and cannot retain heat of water. so answer, is (B)

we know that black absorbs heat but it also radiates heat

In a racing competition at the mountain hills, Harry records the fastest lap time of 25.3 s. The length of the track is 2 446 m. If Harry maintains his fastest lap’s average speed, then he would complete 100 laps in approximately

Which of the following groups of animals does not have common mode of feeding?

how come snake,bee and python have common mode of feeding?

The animals in both option c and d do not have common mode of feeding.

Which of the following is an omnivore?

please check google if squirrel is omnivore or herbivores .

Squirrels are not herbivores, but omnivores.They feed on plants and animals.