Read the notices and answer the questions that follow.

What is the main purpose of the given notice?

AI've been good. What about you?
BI am fine thank you.
CThank you for asking.
DThank you. How do you do?

It can be A and B

Choose the correct option:
Do you like to study or play football?

actually the answer Is C

Read the passage and answer the questions that follow.
Once upon a time there was a little white hen. She lived in a little blue house, and she had a little green garden. Every day she worked in the house and garden. Near her home lived a family of foxes. One day mamma fox said to papa fox, "I want a fat hen to eat." There was nothing in the pantry for the baby foxes, so papa fox started out to find something for them all.
He ran down the road until he came to the woods. "Surely I will find something here," he said, but he found nothing to eat in the woods. As he came near the little green garden he said, "Oh, I smell fresh cake. Oh, I smell a little white hen."
Sure enough, there was the little white hen eating her cake. Papa fox snuck up quietly behind her and grabbed her and put her into the bag on his back; then he ran quickly off down the hill toward his home. The little white hen was so frightened that she could only whisper, "Oh, dear. Oh, dear. Oh, dear."
Just then she had to sneeze, and when she put her claw into her pocket for her handkerchief, she felt her little scissors. Quick as a flash she took them out and cut a little hole in the bag. Peeping out she saw a great hill just ahead, all covered with stones. As papa fox stopped to rest on his way up the hill, with his back turned toward her, she cut a big hole in the bag, jumped out and quickly put a big stone in the bag in her place. As papa fox kept on up the hill, he thought the bag was pretty heavy, but he said, "Never mind, she is a fat little white hen."
Mamma fox met him at the front door with all the baby foxes. "The water is boiling," said she. "What have you in your bag?" asked the baby foxes. "A fat, little, white hen," said Papa Fox.
As he held the bag over the pot, he said to mamma fox, "When I drop her in, you clap on the lid." So he opened the bag. Splash! went the boiling water. It spilled all over papa fox and mamma fox and the baby foxes. Never again did they try to catch the little white hen.

What did the hen do after coming out of the bag?

Choose the best response for the given situation.
Situation: Your sister is going for a school trip.
Response: _______________.

Read the following stories and answer the questions that follow :
Once there was a miser who sold all his possessions and, with the money, bought a great lump of gold. He dug a deep hole at the edge of the garden, and there he buried his gold. Once a day, thereafter, the miser went to the garden, dug up his gold, and embraced it lovingly.
One of the miser’s workmen wondered why his master spent so much time in the garden. One day, he hid behind a tree and soon discovered the secret of the hidden treasure. That night, when the miser was fast asleep, the workman crept into the garden and stole the lump of gold.
When the miser found that his gold was gone, he tore his hair and cried aloud in his despair. A neighbour came running to see what was the matter, and the grief-stricken miser told him what had happened. Then the neighbour said, “Pray stop your weeping. Go and find a stone. Place the stone in the hole and imagine that it is your lump of gold. The stone will serve your purpose, for you never meant to use the gold anyway.”
“To a miser, what he has is of no more use than what he has not.”
Choose the most appropriate title for this story.

It can be a and b

It can be both A and B

Fill in the blanks with suitable adverbs from the alternatives given below :
December is the season of music. The people of Chennai celebrate it __?__. Lovers of classical music and dance soak in this ____ intense atmosphere for fifteen days. Even non-resident Indians ____ visit Chennai during this part of the year. This season of music closes with the New Year.

Look at the given picture carefully and complete the paragraph by choosing the most appropriate conjunctions : 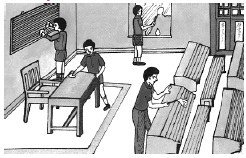 A but
B and
C because
D so

Read the passage and answer the questions that follow.
You might not think of plants as particularly talkative, but they can communicate surprisingly well with each other, especially when faced with danger. According to a recent study in the journal Frontiers in Plant Science, injured plants send out emergency signals to alert their neighbours to start building up their defenses against threats. The research began after a University of Delaware plant specialist agreed to mentor a 16-year-old named Connor Sweeney on a research project. The excited high school student got to work immediately, spending all his free time, including weekends and summer breaks, in the lab at the university.
He first had to grow plants, known as mustard weed, for use in experiments which is not actually as easy as it sounds. He placed the seeds in Petri dishes and test tubes filled with jelly to promote growth. The seeds generally germinated about six days later and began to change into delicate three-inch saplings with bright green leaves.
After the plants had grown to a sufficient size, Sweeney sliced a leaf in two places -copying an insect bite- to see how it would begin the repair process. The following day, the young researcher was surprised to find that while the injured plant remained unchanged, the roots of the neighbouring young mustard weed had grown considerably longer and even had sideways offshoots. Sweeney then repeated the experiment multiple times to check the findings. To his surprise the results were the same! To see what was making the roots grow in these different ways, the university scientists conducted further tests and discovered that the injured plants were releasing chemicals to warn their neighbours of the impending danger. They believe that the healthy plant was growing its roots to absorb more nutrients to strengthen its defenses. As a result, the two scientists began looking for compounds that plants make to increase growth. Sure enough, each time an injured plant sent out a warning, the neighbouring mustard weeds began producing and using plant growth hormones.
The researchers were not sure why the plants actually communicated with each other. But the evidence from their research suggested that there was something more to look into. The plants were clearly in communication, and although it was originally thought that plants were always in competition with each other, this now seems not to be the case, or at least the relationships between them is different to what we as humans see as competition. Although this was not the first study that has analysed plants 'talking' to one another, it was the first to recognise how they communicate. In previous studies done on trees, scientists discerned that when warned about a possible insect attack, nearby uninjured trees begin producing large amounts of bug-repelling chemicals to ward off the attack. These are amazing observations that seem almost fictional. The idea that the plants around us are in constant communication with each other and there needs to be further research to find out if different species of plant can communicate or to see if they 'speak different languages'.
How long did it take for the experiment to work?

its not written overnight