Choose the word that best completes the relationship.

The answer is C

read the passage and answer the questions that follow.
Once upon a time there was a little white hen. She lived in a little blue house, and she had a little green garden. Every day she worked in the house and garden. Near her home lived a family of foxes. One day mamma fox said to papa fox, "I want a fat hen to eat." There was nothing in the pantry for the baby foxes, so papa fox started out to find something for them all.
He ran down the road until he came to the woods. "Surely I will find something here," he said, but he found nothing to eat in the woods. As he came near the little green garden he said, "Oh, I smell fresh cake. Oh, I smell a little white hen."
Sure enough, there was the little white hen eating her cake. Papa fox snuck up quietly behind her and grabbed her and put her into the bag on his back; then he ran quickly off down the hill toward his home. The little white hen was so frightened that she could only whisper, "Oh, dear. Oh, dear. Oh, dear."
Just then she had to sneeze, and when she put her claw into her pocket for her handkerchief, she felt her little scissors. Quick as a flash she took them out and cut a little hole in the bag. Peeping out she saw a great hill just ahead, all covered with stones. As papa fox stopped to rest on his way up the hill, with his back turned toward her, she cut a big hole in the bag, jumped out and quickly put a big stone in the bag in her place. As papa fox kept on up the hill, he thought the bag was pretty heavy, but he said, "Never mind, she is a fat little white hen."
Mamma fox met him at the front door with all the baby foxes. "The water is boiling," said she. "What have you in your bag?" asked the baby foxes. "A fat, little, white hen," said Papa Fox.
As he held the bag over the pot, he said to mamma fox, "When I drop her in, you clap on the lid." So he opened the bag. Splash! went the boiling water. It spilled all over papa fox and mamma fox and the baby foxes. Never again did they try to catch the little white hen.

Who wanted to eat a fat hen?

Fill in the blanks with appropriate conjunctions:
The children were happy __________ they saw Santa Claus.

A when
B whenever
C since
D so

Choose the most suitable word to fill in the blanks.

Choose the correct indirect form of speech from the options given below :
Arun said, "Varun will not play the match." Arun said that Varun ________ the match.

hi I am nishit jha

CHOOSE THE CORRECT WORD/PHRASE TO COMPLETE EACH SENTENCE.

Choose the sentence with the correct punctuation :
What are rahul and priya studying

HOW MANY WORDS ARE WRONGLY SPELT IN THE SENTENCES GIVEN BELOW. 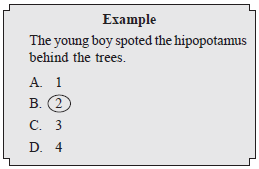 There had been thander and lighting all night long.

it is only thunder 1 mistake not 2

Option no .3 because one mistake is thunder and other is lightning

Choose the odd word out.

Fill in the blanks with the most suitable verbs :
John's mother ________ ironing the curtains.

it's so simple question :)

The correct answer is option D .

then why did u send it to the FORUM?