Our team captain is the best. She is very good ___ making decisions. 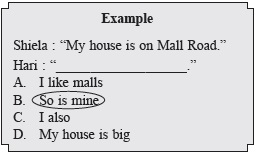