Aristocratic is a word! All options are wrong

CHOOSE THE CORRECT NOUN FOR THE UNDERLINED WORD.
Shanaya had no tolerance for practical jokes.

READ THE PASSAGE AND ANSWER THE QUESTIONS THAT FOLLOW.
Without a formal hierarchy, how do members of online communities work together to create vast founts of knowledge such as Wikipedia? A recent study examines how leadership can emerge in online communities. It seems to indicate that for companies who wish to leverage the influence of online community leaders, identifying those leaders will be more complex than expected.
Who are online leaders? It turns out that online leaders or those considered to influence the way the internet seems to weight certain ideas above others is centrally down to a group of trendsetters who, in general, are people who are related in some way or other to a topic i.e. fashion leaders on facebook that everyone follows or foody people who push restaurants and new food trends. They are essentially people like you and I; an exciting prospect and an interesting one considering how they are created.
How do online communities, whose members are scattered across the globe, work so successfully without formal control structures? While traditional organisations rely on control mechanisms, online communities are loosely coordinated, selforganising, and voluntary. Some observers have labelled online communities "leaderless organisations". When researchers started, it was unclear whether leadership existed at all in online communities. While other studies subsequently uncovered some insights, such as how individuals move from the outskirts to the centre, in the most recent study researchers developed an integrated framework to study leadership in online communities. Traditional leadership theory says that leaders assign tasks and manage relationships, while other research shows that influential members occupy central positions in the organisational structure. The researchers in this case set out to discover whether similar ideas also apply to online communities. To gather data, they surveyed users and studied messages from three online communities focused on technical topics related to programming, examining both the behaviours and structural position within the networks of those identified by other participants as leaders.
The researchers' findings indicate that leaders are mainly distinguished by their task-based behaviours. They contribute knowledge by answering queries, sometimes sharing programming code, and giving personal assessments. Tenure (duration of membership) and participation were positively associated with being identified as a leader, but the number of questions asked by a participant had a negative association, which indicates that a leader is more likely to provide answers than questions. The researchers also rated postings for the existence and frequency of sign-offs, thanks, and personal anecdotes — signs of sociability within online communities — and found that sociability was less significant than knowledge contribution.
However, it can't be concluded that sociability is unimportant in all online communities, just that it is not as important as technical knowledge contribution in the communities studied, which are all dedicated to sharing technical expertise. In technical forums, such as those dedicated to programming, there are, often, correct and incorrect answers to questions; on the other hand, in online communities organised around social support or political action, relationships and sociable behaviour of influential members may be valued more. These more subjective sites may well have a different set of rules governing choice for those inclined to follow trend setters.
The researchers complemented their approach with a structural approach, using the concept of social capital, or resources accessed by virtue of relational ties. In traditional organisations, members in top positions can get information from unconnected groups and trade off on it. For example, doing someone a favour and expecting it to be returned. The researchers wondered whether a similar edge could be gained online. After all, in the context of knowledge collaboration, information is key, and an individual who "bridges" unconnected parts of the network benefits from arbitrage opportunities. By making ties between who responded to whom in the online community, the researchers did indeed find that structural social capital was strongly associated with leadership. Although there is no way to know what came first, the leader's position or the social capital. They also found that leadership is a lot more concentrated than expected: out of nearly 1,000 participants in the study, only 42 were identified as leaders, while fewer still, were nominated 9 or more times!
To an observer there seems to be as many uncertainties as there are answers in this very complex system of cyber leadership and although it may seem that, in actuality, very few people have a lot of control over web content the speed at which leaders are replaced is a clear area of study worth considering because anecdotally the rapid replacements of leaders help bring the diversity and freedom the internet seems to provide. So, we may not have more leaders in the future but instead more people embarking upon and ending their leadership roles.
What is the greatest internet resource?


I think the correct answer should be (d)

C can also be the answer

I cannot post the answers to other questions. Kindly fix this.

Read the following table and answer the questions that follow :: 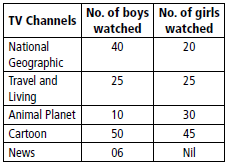 The correct answer is option B.

CHOOSE THE CORRECT CONJUNCTION TO JOIN THE TWO GIVEN SENTENCES.
Madhura's stomach was growling. Madhura hadn't eaten all day.

A And
B Unless
C Because
D Also

CHOOSE THE CORRECT NOUN FOR THE UNDERLINED WORD.
Auntie Fleur brought a dress with floral pattern for me.

CHOOSE THE PART OF THE SENTENCE THAT HAS AN ERROR.
The shepherd took the herd of sheeps to graze in the valley

I don't understand the error

CHOOSE THE MOST SUITABLE OPTION TO COMPLETE EACH SENTENCE.
After the head injury, Gautam couldn't remember __________ for a few days.

A anything
B thing
C many
D more