Read the passage and answer the questions that follow.


In the year 1943, a young, pioneering man in his early twenties went to the Himalayas in Kashmir to study cosmic rays at high altitude. Seeking this research, he was extremely thrilled and decided to set up laboratories to study the effects of cosmic rays.

This enterprising man was Vikram Sarabhai who on his return from the United Kingdom with a Ph.D., founded the Physical Research Laboratory in Ahmedabad, an institution devoted to the study of cosmic rays and other space. In 1955, he set up a branch of the laboratory at Gulmarg in Kashmir. He also set up other branches in Trivandrum and Kodaikanal.

Born on August 1919, Sarabhai belonged to a rich and influential family. Had he wished, he could have become an industrialist, but his basic interest was in Mathematics and Physics. The purpose of the Physical Research Laboratory that he founded was Fundamental Research.

It provided the technology and the scientists needed for the country's space programs. In fact, Sarabhai propelled the space age exploration in the country by expanding the Indian Space Research Organisation.

The credit and laurels for much of what India achieved in space technology goes to him, though he did not live to see many of the fruits of his labour. Among the projects he planned was the one under which India'sfirst satellite, Aryabhata, was launched in 1975.

The Satellite Instructional TelevisionExperiment (SITE) in 1975-76, which sought to bring education to five million people in 2,400 Indian villages, also owes much to Sarabhai's vision. Sarabhai also built a variety of institutions-one devoted to modernisation of the textile industry, another to development of management skills and yet another to popularising Science, apart from the Physical Research Laboratory and the Indian Space Research Organisation. He received many honours and awards for his innumerable services to Science.

Choose the best option to complete each conversation. 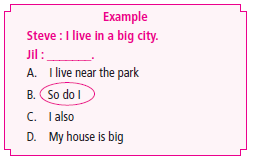 Choose the option with correct punctuation for the given sentence.
why did you come late to school on monday

In my opinion A can also be correct , no I am wrong correct answer is C

CHOOSE THE WORD WITH THE CORRECT SPELLING

Choose the best reply to complete each conversation.

A happen
B happened
C happens

CHOOSE THE CORRECT WORD/PHRASE TO COMPLETE EACH SENTENCE.
My sister's hobby is sketching.

My answer is D: hard

Given below is an e-mail sent by Ritik to his father Mr Ashok Kumar Singh seeking his permission to go on an excursion organised by his school. Complete the e-mail by filling the blanks with the help of options given below:

I am 99 percent sure

I think it's option A because u are writing it to A much respect able person..

I think it's option A because u are writing it to A much respect able person..