Tick the common noun from the given options :

Read the poem and answer the questions that follow. 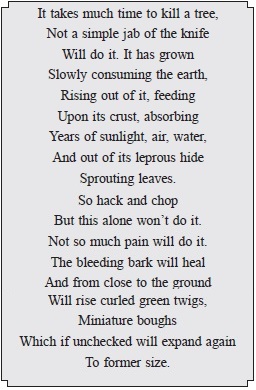 What can hacking and chopping not do?

Read the passage and answer the questions that follow.
Once upon a time there was a little white hen. She lived in a little blue house, and she had a little green garden. Every day she worked in the house and garden. Near her home lived a family of foxes. One day mamma fox said to papa fox, "I want a fat hen to eat." There was nothing in the pantry for the baby foxes, so papa fox started out to find something for them all.
He ran down the road until he came to the woods. "Surely I will find something here," he said, but he found nothing to eat in the woods. As he came near the little green garden he said, "Oh, I smell fresh cake. Oh, I smell a little white hen."
Sure enough, there was the little white hen eating her cake. Papa fox snuck up quietly behind her and grabbed her and put her into the bag on his back; then he ran quickly off down the hill toward his home. The little white hen was so frightened that she could only whisper, "Oh, dear. Oh, dear. Oh, dear."
Just then she had to sneeze, and when she put her claw into her pocket for her handkerchief, she felt her little scissors. Quick as a flash she took them out and cut a little hole in the bag. Peeping out she saw a great hill just ahead, all covered with stones. As papa fox stopped to rest on his way up the hill, with his back turned toward her, she cut a big hole in the bag, jumped out and quickly put a big stone in the bag in her place. As papa fox kept on up the hill, he thought the bag was pretty heavy, but he said, "Never mind, she is a fat little white hen."
Mamma fox met him at the front door with all the baby foxes. "The water is boiling," said she. "What have you in your bag?" asked the baby foxes. "A fat, little, white hen," said Papa Fox.
As he held the bag over the pot, he said to mamma fox, "When I drop her in, you clap on the lid." So he opened the bag. Splash! went the boiling water. It spilled all over papa fox and mamma fox and the baby foxes. Never again did they try to catch the little white hen.

Athe water is boiling.
BWhat have you in your bag?
CWhen I drop her in, you clap on the lid.
DSplash!

Match the sentences with the words below. 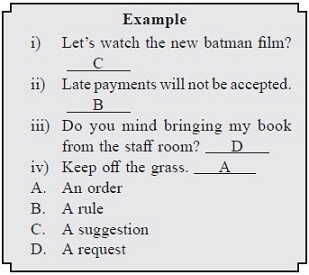 there isn't any sentence for me

There is no question!?

Identify the adverbs in the following sentences :
I have never been to Maldives. I would like to go over there.

A Would
B Never
C Have
D Maldives

Fill in the blanks using appropriate form of the verbs:
I hear someone _______ at the door.

A knocks
B knocked
C will knock
D knocking

Choose the correct word to fill in the blanks.

A Those
B That
C This

But this question is very interesting time

READ THE PASSAGE AND ANSWER THE QUESTIONS THAT FOLLOW.
Mango, India's or Asia's greatest gift to people with a good taste, is also known as the 'King of Fruits'. In their original form, Mangoes come from the forest of Assam in north-east India and Myanmar. The mango tree bears fruit in the height of summer. It is observed, the warmer the temperature the sweeter the fruit, and the sweeter it is the juicier it gets. There are more than a thousand odd varieties of this wonderful fruit to satisfy our taste buds. They come in different shapes like a ball, or oval in shape, kidney shaped or just long and thin. It can be of red and yellow colour like the setting sun or even green as a leaf.
How this king of fruits got its name is an interesting story. The name comes from Tamil. From Man-Kay, it was altered to manga. The Portuguese after coming in the country as colonisers changed the name to mango. It was their experimentation and inquisitiveness about the juicy fruit that we have so many different varieties of the sumptuous fruit. The famous Alphonso or Mulgoa that we cherish today, are the result of their hard work and research.
History is a witness to the existence of this fruit since time immemorial. The ancient scriptures like Upnishads have spoken about the fruit 3000 years ago, but, the world has savoured it for only for the last 300 years! It was mentioned in the Upnishads by the name of amra, rasala and sahakara. Down the ages, several qualities have got attached to the mango. It is seen as a symbol of good luck. In many parts of west and south India, mango leaves are put up at the front door. It is a belief that the mango tree has the power to make wishes come true. The mango tree is also associated with the God of love 'Manmatha' its blossoms are considered to be the God's arrows. Moreover, it is said that the Buddha created a white mango tree which was later worshipped by his followers.
Whose experimentation gave a variety of mango called 'Alphonso'?

Tick the correct punctuation marks :
where do you live in new york

CHOOSE THE CORRECT OPTION TO COMPLETE EACH SENTENCE.

The correct answer is A