READ THE NOTICE AND FILL IN THE BLANKS WITH SUITABLE OPTIONS. 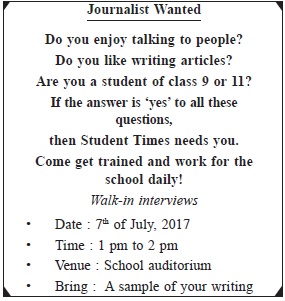 magazine is the correct answer

select an suitable adjective for the sentence. I wake up at six o clock bk listening the voice of the___________ alarm clock a.beautiful b.small c.pretty d.good

Choose the correct sentence formed by the given jumbled words :
Will / he / my / to / house / come

READ THE PASSAGE AND ANSWER THE QUESTIONS THAT FOLLOW.
Over 35,000 different species of spiders live almost everywhere in the world. The only places you can't find spiders are on the tops of mountains, in the oceans and at the poles.
Spiders are carnivorous. This means that they eat only meat. They eat insects and sometimes other spiders. Some spiders eat other animals, such as small fish, lizards, frogs, baby birds and mice. Most spiders use poison to kill or paralyse their prey. All spiders have poison, and to a small insect all spiders are very dangerous, but only a few spiders have poison strong enough to hurt people. Spiders that bite and cause pain to humans are called medically significant spiders.
This means that they have enough venom (poison) to cause a serious bite that will need to be looked at by a doctor. Some of the poisonous spiders found in North America include the black widow, the brown recluse, the hobo spider, and the yellow sac spider.
There are about 6 different species of black widow spiders. Three of these species are found in the warm southern United States. Black widow spiders build webs, and they live wherever they can build one. They rarely live in houses and other buildings, but if the weather gets very cold, they can move inside. Black widow spiders eat insects, and stay in their webs to catch them. Only the female black widow spider is dangerous. She is considered to be the most venomous spider in the United States! Females are shiny black, with a red hourglass shaped mark on the bottom of their abdomens. Although they are dangerous, black widow spiders are not usually deadly because they only inject a very small amount of poison.
The brown recluse spider (often called a violin spider because of the marking on its back) lives mainly in the Midwestern United States. The brown recluse spider also spins webs, and can be found in dark, undisturbed areas. Unlike the black widow, the brown recluse leaves its web at night and goes in search of insects to eat. Both the male and female brown recluse spiders are poisonous. The brown recluse spider is also not usually deadly. In fact, fatal bites almost never occur. However, the bite of a brown recluse spider is very painful and takes a long time to heal because the poison damages the cells near the bite. The hobo spider is not native to the United States. It was originally introduced from Europe, and now lives in the northwestern United States and into southern British Columbia in Canada. Like the black widow and the brown recluse spiders, the hobo spider also builds webs, but its webs are funnel webs and almost never above the ground. Female hobo spiders never leave their webs, and so the male spiders must search for them. Because of this, most bites from hobo spiders come from males. Hobo spider bites aren't deadly, but they are painful. The yellow sac spider is commonly found in homes and gardens throughout the United States. The sac spider also makes a type of web; it makes a sac out of silk. The spider sits this sac when it's not out hunting. Among the black widow, brown recluse and hobo spiders, sac spider bites are the least medically significant. This means that the sac spider's bite causes the least amount of damage.
Although these four spiders are poisonous to people, they don't attack humans. Spiders are more scared of people than we are of them! Spiders only bite if they are trapped close to the skin, or cannot escape. If you do get bitten by a spider, clean the bite and then go to see a doctor.
A female black widow spider ___________.

Yes, Afifa you are right..

(B) is the answer

what is the adjective in the following sentence? Her clothes are new,I just bought them today a. clothes b.new c.today d. bought

I think (B) is the answer

I think (B) is the answer

C Hi? would be inappropriate

C Hi? would be inappropriate

in my opinion it should be option C because it has asked incorrect,not correct!!! Many students get confused in 'Choose the Incorrect option'.So,please don't get confused in these type of questions.

You shouldn't put an interrogation mark after a greeting, so please don't choose Option C as the right option..:)

C) Hi? My name is Diya. This is Sukritee Singh from Bhavans Nagpur

what is the diffrence between we and us?