Fill in the blanks with suitable verb forms from the options given below :
Did you ______ that it's my mother's birthday tomorrow? No, of course not.

A do
B forget
C leave
D forgot

Yes, that's true. How can it be "forget"? I am also confused.Can someone please give the reason , please...?

Yes, Sia i got confused i also think its D but i dont know how is it B

Read the passage and answer the questions that follow :
Urbanisation and its impact

Scores of people leave the countryside every year to come to the cities. The booming cities have far more to offer them, in terms of personal and professional growth. This results in deforestation, as more and more trees are cut down. In fact, this results in more consumption of goods, like furniture, which results in harming the environment.
What most people think is that better seeds will enable them to use available land far more frugally. The arrival of better and scientific ways of land management will make sure that more crops are produced on lesser area of land.
Man is aware of the harmful effects of deforestation. Regardless of this knowledge, forests are still being cut down in large numbers leaving animals homeless.
Which word in the passage means “many”?

A Plenty of
B Considerable amount
C Scores of
D Extensively

Fill in the blanks with the most suitable conjunctions :
Dennis _______ his friend were playing cricket.

A but
B and
C as
D therefore

Read the short paragraphs given below and answer the questions that follow :
Bats that eat fruit and nectar spread seeds and help flowers to grow. Without bats, many important plants would not thrive.
What does the word thrive as mentioned above mean?

Look at the picture and choose the correct answer. 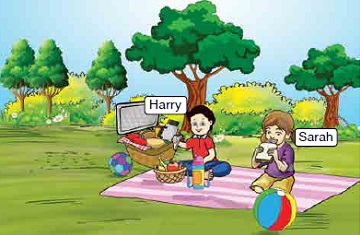