Mark the word with the correct spelling:

CHOOSE THE CORRECT WORD/PHRASE TO COMPLETE EACH SENTENCE. 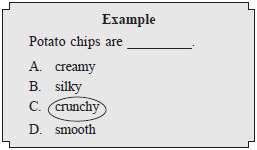 A is the answer

Read the passage and answer the questions that follow.
A company in Sweden has started using driver less electric trucks on a public road.
The project is testing ideas that could bring important changes in transportation. The trucks are called 'T-Pods'. They are shocking to look at because they don't have windows. In fact, they don't even have a place for people to sit inside them. Not even an emergency driver.
What the T-Pod does have is lots of cameras and sensors and a complicated computer system, so that the truck can drive itself. The T-Pod can constantly and quickly exchange information with a control center. Most of the time T-Pods will drive themselves. But when the trucks are in a difficult situation, a real person will be able to take over and drive until the problem is solved.
The small size allows a T-Pod to travel farther and charge faster. T-Pods can go for about 124 miles on a single charge. The developer of the truck says the driver less electric truck costs about 60% less to run than a normal diesel truck with a driver. And it doesn't pollute.
Though the T-Pods can drive at speeds as high as 60 miles per hour, Sweden is only granting the developer a speed limit of 3 miles per hour. That's about as fast as a person walking at normal speed.
The company wants to have 200 trucks on the road by 2020.

What is different about the new truck?

AIt is very fast.
BIt has no driver.
CIt is made in Norway.
DIt is the smallest truck.

Mark the word which best describes the given pictures :

Choose the correct option to complete the sentence in indirect speech :
Jerry said to Tom, “May I take this piece of cheese?”
Jerry asked Tom if ___________ that piece of cheese.

I think the answer should be B, C doesnt sound write

Choose the most suitable antonym of the word given in bold.

There are four chapters that are extraneous to the structure of the book.

The thin atmosphere of Mars can cause scary ______.

Choose the best option to complete each sentence.
Last evening we played football ________ we didn't have a bat to play cricket.

Fill in the blanks with the most appropriate conjunctions:
The shops were closed, ____ I could not buy a book.

A and
B but
C because
D so