My grandfather goes to ______ city park for morning walk.

Choose the correct option to fill in the blank.
My brother ________ this film, it'll really shock him.

C is the correct answer

Choose the best response :
Do you watch television very often?

The correct answer is A.And I choose A. 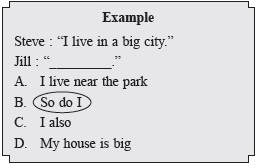 AI love my books and I keep them with a lot of care.
BWe bought the same books from that shop. Remember?
CNever mind. Return them next time when you come.
DLeaving your books at home is a good idea while playing.


It should Be c

This is wrong it should be C

Choose the most suitable option to complete the conversation.
Father: If you have a problem we need to take it ________ with the shopkeeper.
Son: Why? Will he be able to give me a replacement?

Choose the word opposite to the underlined word.
History abounds in examples of courage and bravery.

Choose the part of the sentence that has an error. 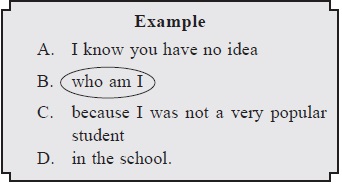 Choose the correct word/phrase to complete each sentence.
Ritika is very __________ as she is always willing to try new and difficult things.

What is the meaning of the word 'shovel' as used in the passage?

Read the poem and answer the questions that follow.
I go to bed.
I close my eyes,
but specters
in my mind arise.
I punch my pillow,
toss and moan.
Clearly, I
am not alone.
I crack an eyelid,
scan the room –
that's when I see
dark shadows loom.
I rub my eyes
so hard they burn.
I crumple up
my sheets and turn.
I struggle, wrestle
through the night,
then, finally,
at dawn's first light:
as sunbeams' cross
my window creep,
I shudder twice and
fall
asleep.