The given graph shows net uptake and net release of oxygen by a plant kept in open over a 24 hour period.
Which of the following holds true regarding the given graph? 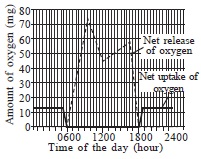