Read the statements regarding the given food web and select the option that consists of all correct statements. 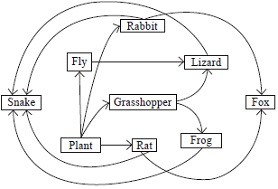 The answer should be - d